Lots going on in the ukulele shop 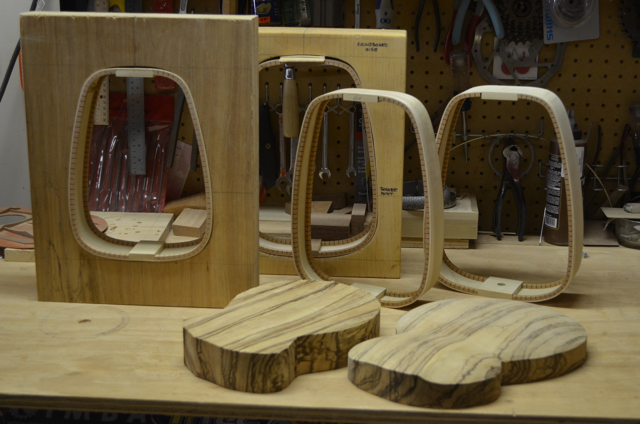 As always, a dearth of posts means that lots has been going on in the shop. We’ve had to adjust our work schedule because the weather is heating up. It’s supposed to hit 106 degrees on Saturday so we’ll be trying to start around 6:00am so we can finish up in the shop in the early afternoon and then do the computer work when it’s really hot.

In the image above, we’ve got six ukulele bodies taking shape.

Three are keystone tenors: Roni (an all maple blonde, named for Veronica Lake), Traveler (a thin-bodied travel depth tenor in Maple so it’s travel-tough) & California (a standard tenor with a golden Kauri sound board)

One is a super concert keystone and this one will have a quilted Maple soundboard hence the moniker “Fancy” because this one will look fancy indeed. As fancy as we make them anyway.

Another one is an asymmetric, FatBottom, semi-hollow, electric hardbody like the famous “F1”. This one has a Zebrawood body and will likely have a golden Kauri sound board. She is named Savannah (which is the habitat for Zebras…um with an “h” added the end).

The last one is a super-soprano named “Decadent” and she is similar to our ukulele Renata. Decadent is also done in Zebrawood and we’ll probably go with dark Kauri for her sound board.

In this image you can see the difference in depth between Traveler, a thin-bodied travel ukulele and California, our standard depth tenor. The difference is quite significant. 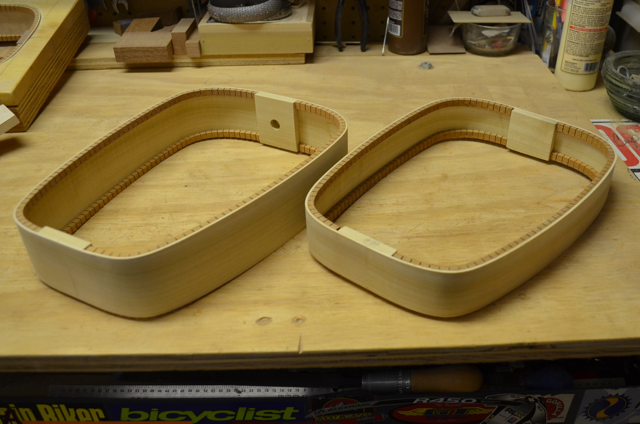 The travel tenor is on the right. Even though she is quite a bit shallower, her back is still curved from neck to heel. 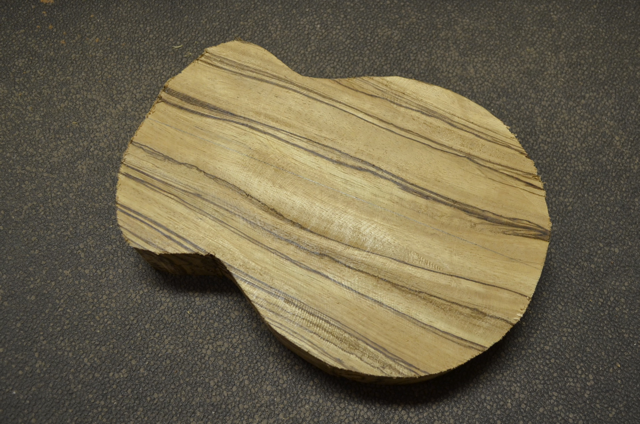 This is the Zebrawood body for “Decadent”. It’s quite exotic and the contrast between the dark and light stripes is quite bold. 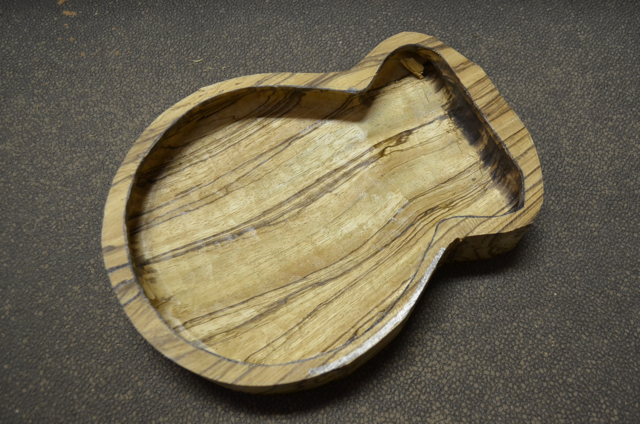 Decadent’s inside is beginning to take shape. From this angle the sides appear very thick. In reality the edges are deeply undercut and the sides are already down to 1/8 inch thick even at this early stage. 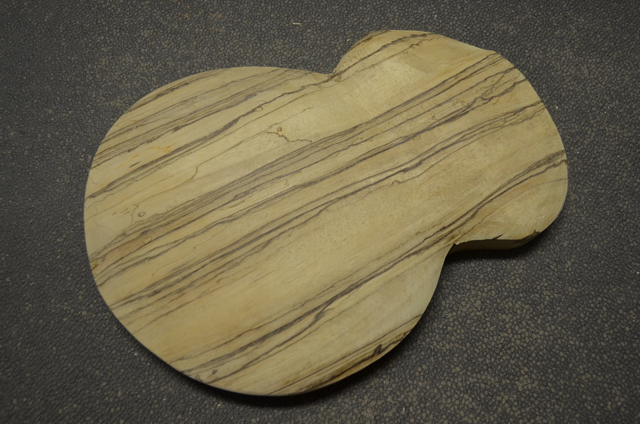 Savannah is the successor to the famous “F1”. It shares the same body shape and we hope, the same ethereal sound.

Savannah’s interior is also beginning to take shape. Again the sides will be deeply undercut but there are several areas that are left thicker to support the neck, strap button and the pickup jack. These semi-hollow bodies are extraordinarily strong. 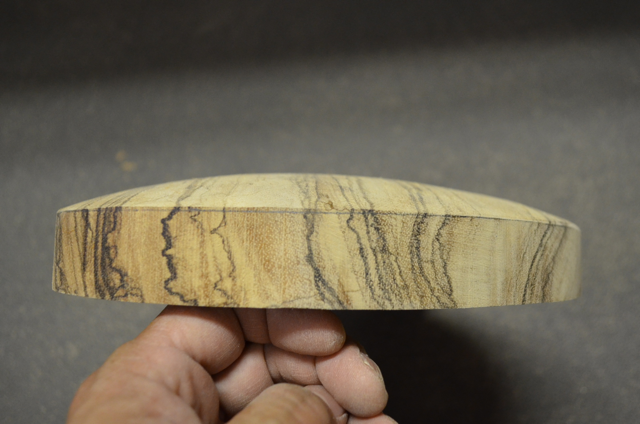 This end view of Savannah’s body shows the deep curve to her back. These semi-hollow bodies transmit a lot of vibration to your body as you play. You and your ukulele become one!

These two Zebrawood semi-hollow ukuleles are a bit of a conundrum. We are trying to reduce our use of exotic and rare woods so we would not ordinarily use Zebrawood but these pieces were gifted to us. We had to decide whether to not use them at all. We thought that using them could then drive up the demand but on the other hand, not using them would waste their beauty. Is using them an endorsement of their use and if so, what is an alternative? If any of you have any thoughts on the topic we’d love to hear them. 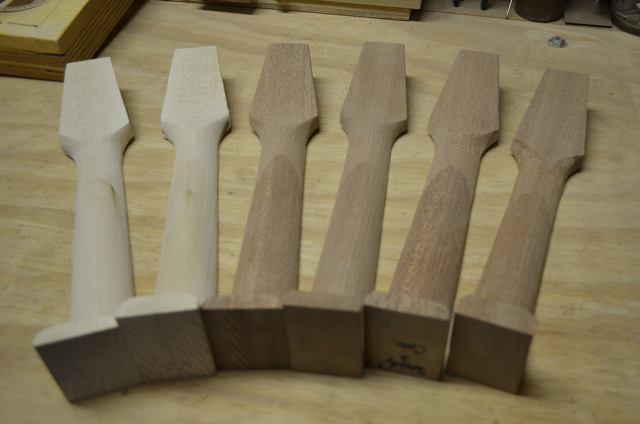 Six necks for six ukuleles. We spent most of yesterday building necks. I find it is much more efficient and also builds a better product to do things in batches. I get focused and in the groove so to speak and plain get it done. Each of these necks is carved individually so the volutes and heels are utterly unique. 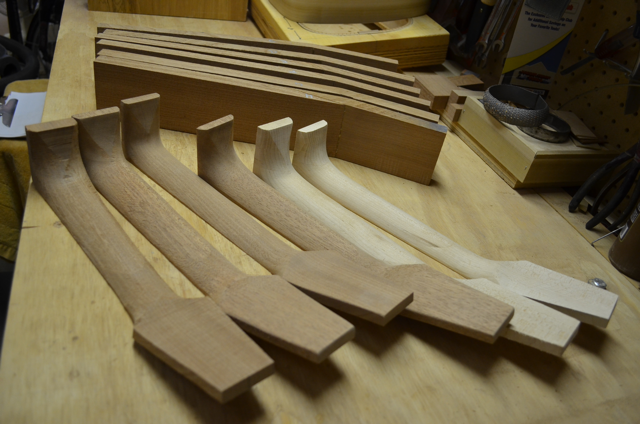 Not only did we rough out 6 necks, we also built 6 additional blanks which you can see in the background. These blanks are quarter sawn Sapele, really beautiful stuff. 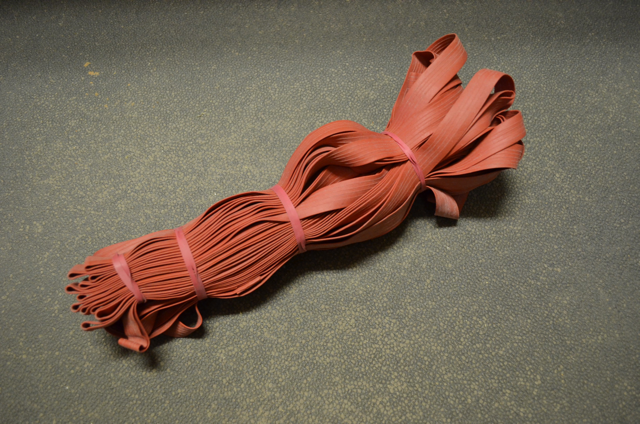 These are our new high-zoot fretboard clamps. They are actually 40″ x 3/4″ giant rubber bands. We cut them so they are 1/4″ wide and then wrap them to glue fretboards.

So that’s what we’ve been up to lately. Oh we’re also working on a new size keystone. It’s going to be right in between a concert and a tenor. We’re calling it the “Ideale”. It will come with either a 16″ or 15″ scale and is designed to fit everyone who feels a tenor is too big and a concert is too small. It will have 13 frets to the body and the first one is for me. It’s nice to be the luthier!