Headless or not? That is the question. 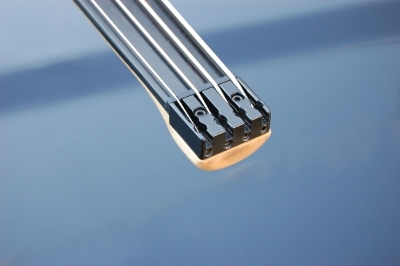 Headless or not? As we’ve been playing our first solid body electric basses, we’ve definitely noticed the weight, particularly after playing ukuleles. Our v1.x basses, while lighter than most full-size basses, still are quite hefty. So the notion of going headless, as well as relieving the body inside, have come up as ways to reduce overall weight. The problem I have with headless, is that it just looks so weird. Aesthetically I just can’t get past the decapitated look.

One solution might be to make a lightweight “head”, similar in shape to our standard head, but thinner and lighter and perhaps a bit smaller as well. But instead of having tuners on the head, we’ll simply anchor the strings at the head and move the tuning down to the bridge. A head will still be there to give balance to the appearance but it won’t need to support tuners. By doing this we don’t save as much weight as we would by completely eliminating the head altogether but we get rid of the blunt, chopped look. We want form to follow function, but in musical instruments aesthetics are not insignificant. 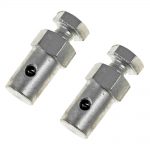 We’ve looked at alternate ways to anchor the strings at the head in the event we go headless but so far the solutions have been uninspiring. There are some cable stops available but they weigh nearly half the weight of tuners and they look awful. We have two very nice standard bridges that we are evaluating right now and we’ll likely use one of them before we tackle the headless question. Those bridges are the KSM Foundation and the Hipshot A-style. Both of these seem like solid solutions that we’ll be exploring.